“This week I won a $37.5k proposal and a $15k proposal. Massive step towards my goals. Just the beginning 🙂 You’ve been instrumental in helping me grow as a person and in business. Thank you.”

Yesterday I got a text. Not just any text, this was some unsolicited feedback from someone I’ve been working with for the last few months. And it blew me away. This person is getting results. Big results. Results that involve hard cash. I was stoked to receive the message and delighted for my client.

I have been reflecting on what has played out over the last few months to result in a massive week for my client. Lots has happened, but at the core of it the process of change that my client has been going through is remarkably simple. Now, I don’t mean to play this down or to diminish their achievements in any way. This person has repeatedly stepped out of their comfort zone, challenged some of their beliefs about themselves and the world, and taken focused action to create the change. It’s not been easy, but the process itself is simple.

This article is about what was involved, how it played out and how you can achieve massive results by following the same process. There are four parts to this:

Get clear on what you want

The critical and foundational piece in this success story is something that makes the difference between being busy and getting results. When you’ve got it the path is clear, decisions are easy and challenges are obvious. When you don’t have it’s like navigating with a broken compass, every decision is tainted by doubt, and roadblocks seem to appear from nowhere. Having clarity on what you want to create is such an important factor in creating it, and it is a critical factor in the results my client is achieving.

We have spent much of our time together getting really specific on how he wants his life to be, how he wants his business to run, what kind of results he wants to be getting in the world. This is both in the form of real world, tangible and measurable results like hours worked per day and revenue per month, and also the more intangible, internal results, like state of mind, satisfaction and security.

The result of investing time in getting clear on these things is that a vision begins to form. Something to move towards, to aim for, a destination.

Identify the barriers and deal with them

This is where the rubber hits the road. Having a destination and starting the journey is one thing, many start out with good intentions, but addressing the barriers on the way is what makes the difference between actually getting there or giving up and going home. They need to be identified and dealt with for you to reach your destination.

Barriers can take many forms, from “I don’t know how to do this”, to “I don’t believe I can do this”. Whether it’s a lack of skill or confidence or something else, barriers can feel insurmountable, until you deal with them. The first part of dealing with them is identifying them, because they are not always clear and in the open. Getting clarity on your destination will help to bring these out into the open, and there may be some other work required as well.

Once identified, the next step is being willing to face them and deal with them. Note to those looking for the easy ride- this will involve getting out of your comfort zone! No-one is born with the skills to sell $37.5k proposals, it is a learned skill just like any other. The first time my client made a big proposal it felt weird for him, it was new territory and he didn’t have any references for it yet, but once he had done it the first time, the next time was easier, and the next time even easier. And now, it’s not a barrier anymore.

When you understand how the feeling of being out of your comfort zone works, then it’s much easier to be in that space and be okay with it. Things that seemed so big and important and scary become just another item on the do-to list.

When you start to get comfortable being uncomfortable, perceived barriers become just the next step. And when you’re operating from this place, well then anything is possible.

Action is like the engine of the car. It’s great having the destination and the roadblocks identified, but it’s the engine of the car that will actually do the work to get you there. Nothing happens without taking action. You can have the best ideas in the world but unless you do something about it, so what? “Take massive action” is a common phrase you’ll hear in the personal development world, but taking action is a double-edged sword. If you plough ahead, without a destination and without dealing with the barriers you need to overcome, then action is what will suck up all your time and leave you driving round in circles, feeling burnt out and exhausted. But with a clear direction, and with the barriers identified and on the to-do list, then focussed action is what turns ideas into realities.

In my coaching sessions with this client, we are always action focussed. There is always a next step, an action to take away, something to go and do before our next conversation. Each one of those steps is relatively small on it’s own, but when you add them all together they quickly become greater than the sum of their parts. And once you’re taking action on a regular basis, however small those actions are, then momentum begins to play a role. Taking action becomes easier and the results you begin to see are a motivator to keep going. Before you know it you reach a major milestone and realise how far you’ve come, and by then there is no going back. Momentum is a powerful thing.

I talk to a lot of people who have great ideas, but who haven’t done anything about it. Who spend lots of time reflecting on what next, but never actually take a step towards it because they’re waiting for the right moment. People who spend hours and days researching and learning, without ever putting any of it to the test. Lots of time and energy is used, but they never experience the results because they don’t take action.

Taking action is what turns ideas into realities, and even seemingly small actions can have huge knock on effects.

The final piece in this process is the turbo boost in the engine. It’s the thing that means you get there sooner rather than get there eventually. It’s about the willingness to admit you don’t know what you don’t know and seek out those who do. It involves humility, swallowing your pride and listening to others, even when you don’t like or agree with what they have to say. It can be tough, but when you embrace the not knowing and surround yourself with people who do know, then you have a team to support you, and that will lead to better results.

This was something my client dealt with early on in our relationship. This person has been running their own business for a number of years and was not used to asking for help. At the start of our relationship, the thought of asking for help was a sign of weakness to him, something that somehow devalued him in the eyes of others, something that proved that he didn’t have everything under control. The decision to start working with me was momentous in itself, this was the first time he had engaged someone else in such a way, and it quickly became clear that other experts were needed too. Mentors with specific knowledge and skills were going to be vital to achieving the goals that had been set. Once we had dealt with the thinking that was preventing him from asking for help, he quickly identified the right people, reached out to them and opened up some relationships that have been critical in the results he is now achieving. What’s the best way to learn how to sell $37.5k proposals? Talk to someone who sells lots of big proposals and find out how they do it!

Asking for help is not something to be avoided, you don’t need to figure out everything on your own, you don’t need to make all the mistakes yourself in order to learn from them. Others have gone before you and can condense years of experience into ideas and rules and processes that can really help you to level up and get to where you want to go much more quickly.

When you have a strong team around you, you will get better results.

Get the results you want

Getting the results you want can seem like a distant dream, but when you have a process to follow it becomes a whole lot easier. Get clear on the destination, identify and deal with the challenges that are in the way, take regular, focused action towards your goals, and seek support where it will help you. The journey will be exciting and exhilarating, and it will only be a matter of time before you get to where you want to be.

If my message resonates with you and you are ready to start creating bigger results in your own life, then reach out to me at nathaniel@nathanieldunn.com.au for a conversation about what that might look like. And if you know someone who would benefit from reading this then please share this, because sometimes small actions can lead to big outcomes.

You have Successfully Subscribed!

Your email is safe with us - we never spam and you can opt-out at any time.

Please Enter Your Details Below:

Success! One last step - check your email to confirm you received our welcome message - and a little surprise ;)

We never spam and you can opt-out at any time in a click. 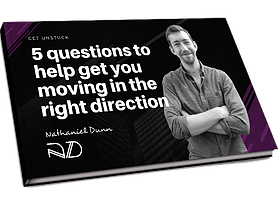 Please enter your details below:

You have Successfully Subscribed!